I think I have always liked peanut butter. But recently, I seem to be giving in to my craving more to indulge in it. It doesn’t help that I discovered, some years ago, that the local cafes (starting with Ya Kun, and subsequently now, more and more of these local outfits) are having peanut butter as a regular item on their menu! 🙂

I love Ya Kun’s toast, because it is crispy and crunchy, as compared to the generally much softer and not-at-all crispy/crunchy “toast” from Killiney or some other cafes. When they had a version that had peanut butter as the spread, that was like a heaven-sent. I don’t know what else they spread on it, but to be precise, I always tell them I want the “peanut butter toast, without butter”. I know it sounds a bit silly, since peanut butter is a term in itself, but I infer that butter is the basic spread on every single type of toast, followed by whatever else they spread, so I do not want the butter, but only want the peanut spread. It goes fabulously with a coffee or tea, especially now that I have discovered the goodness of coffee sans milk, a.k.a. kopi-o (siew dai). I have tried it without sugar, and it is drinkable, but doesn’t really taste good, somehow.

Along with the other cafes that I have now discovered offering peanut butter / crunchy peanut toast, Toast Box’s version is one of my latest favourite, the multi-grain peanut thick toast. Pairing a slice of thick, toasted, chewy bread with a generous spread of crunchy peanut butter is absolute nirvana for someone like me who loves bread AND peanut butter. Just check out this awesome deal.

As compared to the usual kaya butter toast, I think this would also serve as a slightly healthier choice? Although I doubt that the peanut butter is worth any less calories, because I do taste the saltiness in it, but as I really love peanut butter, I would like to comfort myself that it is a better choice, whether comparing it against the kaya butter, kaya sugar, or whatever other toast, or even against the muffins, cakes or pastries that I would have ordered had I visited Starbucks or Coffee Bean instead.

The picture earlier had a filter, rendering it in a nicer hue of colour. This is another closer look at the toast in plain colour. Still awesome; as I look at it, despite just having had lunch not long ago, I am craving for it. I wonder when, or if I can ever stop craving bread and spreads.

Once, I visited another Toast Box, and they didn’t have the multi-grain thick toast, bleah. The cashier wasn’t particularly friendly too as she responded that they do not have it, and also because I do not really fancy having thick toast in white bread, I decided to just order the “Traditional Toast” with peanut butter. I don’t know if I should qualify it as a bad choice… because their traditional toast is really pathetic; they sliced off the sides of the bread, then cut it into half with some spread in-between, and this is what you get. 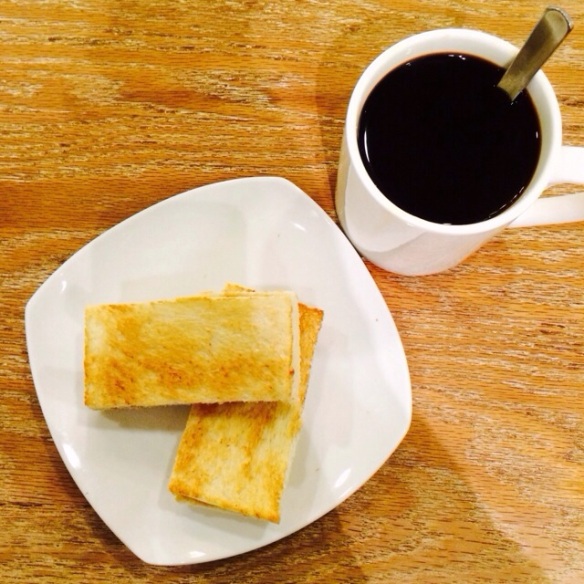 A serving of peanut butter toast that I get from Ya Kun, Coffee & Toast or Nanyang Old Coffee (is that its name), gives you 4 pieces of bread, because they use the old type of white bread (usually dyed brown) that is longish/rectangular-shaped. This is probably the newer, modern kind of square bread. This obviously fitted nowhere within my huge appetite and left me totally unsatisfied. It also didn’t make things better that the traditional toast wasn’t well-toasted, by my standards, so it didn’t feel crunchy enough. 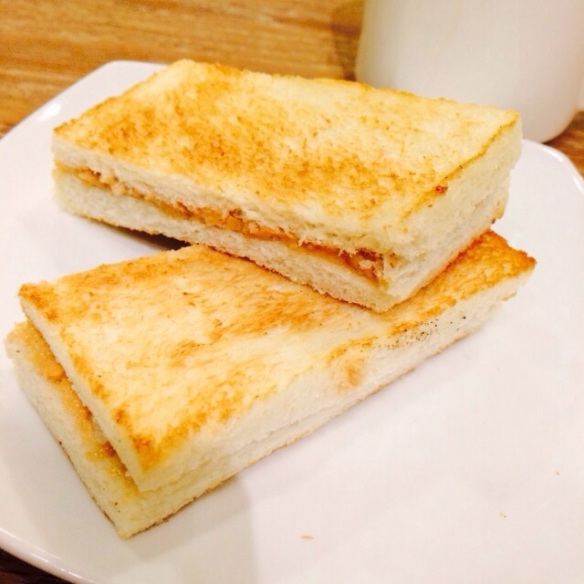 Not that the thick toast is super well-toasted; in fact, it isn’t as well. But the chewiness of the multi-grain toast alleviated that deficiency, and I’m happy to just chew on the bread with the copious amount of peanut butter literally dripping off the surface of the toast.

On a quiet and peaceful Sunday morning, I woke up at the usual time that I would on weekdays (yes I can imagine all the drop-jaw expressions on your faces) and headed for yoga class. Unsurprisingly, the class at 8am was not empty. It wasn’t packed to the brim like weekday peak hour classes but I would estimate attendance to be more than 50 percent, and that is a conservative estimate. Yogis, or I would think exercise/fitness enthusiasts, can be people who don’t mind foregoing some sleep for an early rush of endorphines.

I had another reason that morning though. That 8am class wasn’t the usual class I went for, but I needed to be there early and leave early, as I had to then shuttle to the airport. My sis-in-law was jetting off for 3 months with my little baby nephew, to visit her sister and as well as to take a break abroad perhaps. I could only wish that I could also take a long break somewhere, but I guess it will happen if I want it to. I just need to stop thinking so much.

It started to pour really heavily while we were at the airport. And it felt a little strange, being there and not being the traveller. My usual routine of stepping into the airport terminal would be to head to the check-in counter, then immediately proceed to the departure gates straight into the passport control area. I don’t hang around outside because there was never a need to and I’d much rather be checking out DFS.

After her check-in was done, the family went to have breakfast/brunch at Toast Box, and this was what I ordered:

Kopi-O with a cupcake (or also known as 鸡蛋糕). I had wanted to try Kopi-O for the longest time and see if there is any difference between this and black coffee (western-style). I know there shouldn’t be too much differences yet there should be because of the types of beans used and how the beans are prepared. I don’t know too much about the mechanics of bean-roasting in Asian/Chinese-style versus Western-style, but the coffee does taste a little different. The next time I try Kopi-O I will try to remember how it is like, but will request for siew-dai (less sugar) or maybe kosong (no sugar) to really be able to decipher the taste of the coffee. I was worried it’ll be too bitter and acidic so I had just ordered a normal Kopi-O. Even my dad drinks Kopi-O and not kosong. Haha.

But well it was drinkable and in fact not as acidic as I’d imagined! In fact, I’ve had much more black coffee or Americanos elsewhere that turned out to be way more acidic than this. Or maybe the sugar made the difference, because on the other occasions I hadn’t added much sugar, or used brown sugar instead.

On the other hand, the 鸡蛋糕 that I ordered wasn’t that great. It was on Instagram that I saw someone posting a picture of the soft fluffy traditional cupcake that she bought from a confectionery, and she mentioned that Crystal Jade’s cupcakes are good. So when I saw it at Toast Box I decided to order it and it wasn’t fantastic. It’s just like a normal sponge cake that was pretty spongey/airy and it lacked the fragrance that I generally associated with these cupcakes that I also used to enjoy when I was a kid. 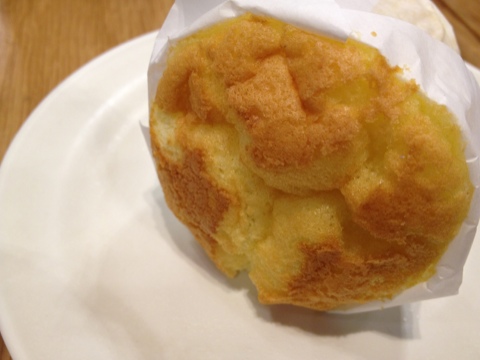 The good thing about it though, was that it was not really sweet and it went well with the coffee. I think I will drop by Crystal Jade one of these days to buy one of their 鸡蛋糕 to try!