After hearing several raves about the Afternoon Tea set at the Marmalade Pantry, I finally got to try it one day. All this while I have not really had the chance because afternoon teas tend to be too much for two persons and it’s typically geared towards more sweet than savoury items. Despite that I generally have a sweet tooth, there needs to be a balance, usually.

Priced at S$38 for a set that is supposed to serve 2, it’s really quite value-for-money because as compared to some other places, this works out to be about S$22 per person after applicable taxes.

The afternoon tea offerings are served in a three-tier rack, with the top tier holding the condiments, which includes strawberry preserve, marmalade (of course they can’t not have this) and clotted cream. The middle tier displays the scones, a mixture of mini buttermilk scones and mini cranberry scones, a whopping total of 10 pieces! Of course, these are about half the size or less of a usual scone, but I think there is still too much of it. 10 pieces! Gosh, how can anyone finish that much, which was why I guess most comments I read about this set would be that it probably would serve three better instead.

The lowest tier serves an assortment of mini sandwiches, which includes 2 open-faced ones. These are supposedly egg and cress, beef and horseradish and green land shrimp. These finger sandwiches make up the only savoury part of the set, and we both agreed that we would rather have swapped out some of the scones for more of the sandwiches because the bread is really nice! The fillings are great as well but I like the toasted and crusty texture of the bread. Perhaps one of these days I could order the sandwiches there just to have the bread. 🙂

A closer look at the overwhelming number of scones. They aren’t too bad, but from what I could recall of them and what I had before, they aren’t the best scones around. The size is great of course, because we all know how dense scones can be and just one normal-sized scone could count for a meal/snack, e.g. breakfast. Another point to note is that the clotted cream also isn’t fabulous. Clotted cream is of course better than whipped cream, anytime, but the clotted cream at Marmalade Pantry still feels a little light and not as decadent as how we would usually want clotted cream to be!

Besides these, the set also comes with a cupcake each of your choice. We picked the Limonata (tart lemon glazed cake) and the Granny’s Apple (spiced apple and cinnamon cake with cream cheese). The latter, with the dollop of apple on top, was a much better option, because the Limonata’s topping somehow just tastes too sweet and artificial, even its base. I would have expected something more zesty but it just felt very sweet overall. 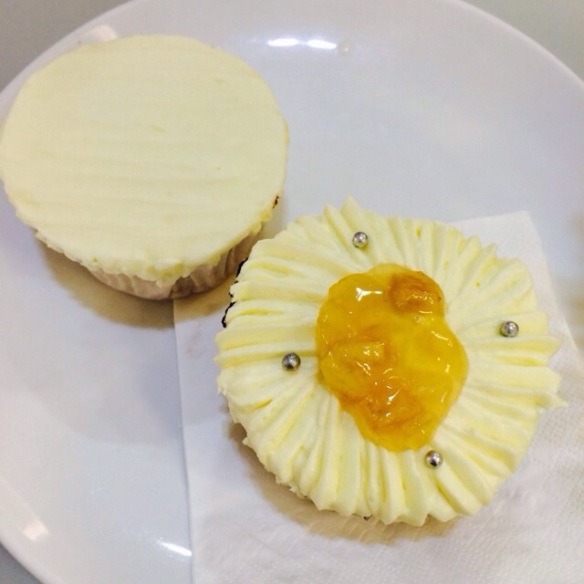 Not too bad an experience, but there are so many other afternoon/high tea sets around to check out to do a repeat, unless it’s really worth it or good, such as that at Fosters! It costs just $11.50 for 2 scones, a slice of tea cake and a finger sandwich. From what I remembered of it, the scones and clotted cream they have are pretty awesome.

Oh and Marmalade Pantry’s set also comes with a pot of Gryphon tea each of your choice. I would have preferred if they offered coffee too, but then it would probably have resulted in me overdosing on coffee, and what’s Afternoon ‘Tea’ without tea?

Marmalade Pantry is now located in ION Shopping Mall, since the building opened… couple of years ago? It is on the third level and can be quite easily spotted since on the upper levels of ION, a restaurant sprawled in the middle can’t be missed, just like TWG that occupies level two and have also spilled over to level one.

The open concept of this Marmalade Pantry lends itself well to integrating with the mall, and perhaps also letting passers-by catch generous glimpses of the fare that patrons are enjoying. It probably also helps to diffuse the possible noise that could result if the restaurant was more built-up like how TWG is. But I preferred the built-up premises that TWG has on level two, because it provides more privacy, since I do not wish to have people poring over my meal choices when they are in the midst of window-shopping. TWG on level one is in a different playing field since it is located in a corner/side and the open concept works better when you don’t have random strangers strolling by appraising you while you eat or sip on a tea.

Anyway, this is probably only the second time I am there, going by the “love” that I have for this new location and also the fact that it tends to get really crowded all the time. The first time I dropped in was in 2010! Gosh, it has been that long, but then it was a weekday evening and it was not difficult to get a seat. This time, I met a couple of friends there on an early Saturday afternoon and thankfully they managed to get us a table by the side. Perhaps we were early, since we met at around noon, because by around 1pm or later, a queue had begun to form outside and we were being hurried to settle the bill and leave.

I didn’t have any mains that day and ordered a slice of carrot cake and coffee, despite knowing how great their cupcakes were from the last time. Even though I had the whole cake to myself and felt rather full from it to feel comfortable thereafter in yoga class (note to self: give myself more time for digestion; a 2-hour timeframe is not enough!), it isn’t as humongous as the carrot walnut cake at Cedele, and I love that the cake isn’t too sweet or dry. It is adequately moist and tasty and the cream cheese frosting wasn’t exceedingly generous to become overwhelming. Besides, it goes perfectly well with the coffee, which without any sugar or milk, still does not feel too bitter or bland.

One of my friends ordered a wrap for lunch and it looks good; she finished almost everything on the plate so I assume that taste-wise it should be pretty ok too. Another friend ordered pancakes, and they were really huge! The pancakes here are like the American type of pancakes that are thick and big, and out of the three slices that came on the plate, she didn’t even finish one complete slice. Maybe they weren’t that good, and most of the pancake was drowning in maple syrup that I surmise must have made them soggy and sweet.

For the same group, I really prefer the cosier setting of Toast at Ngee Ann City, and I love Marmalade Pantry when it was situated in the basement of Palais Renaissance. Of course, the higher visitor traffic means perhaps better business for the restaurant but I really miss having nice cafes that do not daunt people with snaking queues that could usually end up making the whole place become too boisterious and unwelcoming.

It was a short meet-up since the food did not take too long to be served and we didn’t spend too much time eating. After we were done or appeared to be done, the plates were cleared away and they asked if there was anything else we would like. Looking at the queue outside, we decided to be nice and pay up and leave. Also, I wasn’t much in the mood of chatting for some reason; everything just felt foreign and distant at some juncture. Through the passage of time, things can only usually go two ways, either you meet someone again and have endless things to prattle about or you draw a complete blank. Whatever is meant to be will just be.

Met up with a friend last night for dinner at Marmalade Pantry after being disappointed by them a couple of times during weekends when they were fully occupied.

I’ve heard before about their ‘girls’ night out’ or was it ‘ ladies’ night out’ (or whatever other name it takes on) promotion during the weekdays but had not checked it out until last night, and it was the kind waitress who pointed it out to us who were oblivious to it, that there was a 20% discount off food items ordered and certain drinks going for $6++ each. I must say it was a promotion that was definitely worth it, because the 2 of us practically were stuffed from dinner of a Bellini, a main, a cupcake and a coffee each. After all the discounting, the bill came up to about S$40 each. I had a Tagliatelle that I liked so much (although it had a very strong basil taste I think) I finished every morsel of it on my plate, and the Limonata cupcake with the lemon icing coating on top was just to-die-for. The peach bellini, that was really a slice of peach in a flute of champagne, went down very well with me especially at a price of $6. We made prior reservations, and at 7pm, the open-concept restaurant on the 3rd storey of Ion was relatively empty. However, it started to fill up with more diners closer to 8pm or thereabouts I didn’t take note of that, so it might be good to book your seats in advance.

My skinny latte wasn’t fabulous because I felt it had an odd after-taste to it, though I wasn’t sure if it was caused by the basil in the pasta, still I don’t have too many complains about my dinner experience. In fact, I pretty much had a great time catching up with my friend, and it helped tremendously that on week-nights, the mall isn’t full of shoppers loitering around the outside of the restaurant so the open-concept seemed fine. Perhaps I just didn’t notice people walking by outside because I was facing inwards. This is probably just the third or so time I have gone to the Marmalade Pantry, the first 2 being visits to the one that used to be (or is it still there) at Palais Renaissance. Besides the fact that Palais is a little out of way, I prefered it because there was more space within the restaurant between tables, if I remembered it correctly, and the basement location offered a more intimate setting perhaps. Their cupcakes are great if not extremely sinful, so after last night’s meal I think I gained more pounds that I should ideally be shedding.