I’m sure there are plenty of tributes all over the blogosphere, dedicated to the man who is also known as the Founding Father of modern Singapore. Most of us are deeply saddened at his passing, despite that he had lived a great and fulfilling life. I guess we feel a big sense of loss because knowing all that he had done for us, devoting much of his life to building Singapore, there can never be a second person who would come close, at least not in our opinion, for many years to come.

It is also with him leaving us that many of us get to know him better, his accomplishments and achievements, and learn that he is pretty much a misunderstood politician. I am never a keen follower of politics, and ashamed as I am to say that I do not really know a lot of the who’s who in our local government, it is just a personal preference to not take an interest in it. The only times I was ever involved were just in recent times when I had to take part in one presidential election, and the most recent General Election where the constituency I have lived in my whole life was being contested. So you can imagine how apathetic I am politically. Throughout the week which was called the National Mourning week… regular TV programmes were disrupted and in their place, features of Mr Lee were aired, showing snippets of speeches that he made, interviews that he gave and chronicles of his life. I learned a great deal about him that I never knew, and even though right after his funeral was over, on Monday morning, I started griping about the train delays again, I am still thankful to him and grateful for what we have here in Singapore that I call home.

When I think back, all that we have now culminated from the policies of this one man, who became the first Prime Minister of Singapore at an age that is even younger than what I am now. How does someone have such lofty aspirations to want to build a better Singapore, when at this stage of my life, I am still drifting aimlessly in life, grousing about trivial things daily. I suppose that is the mark of distinction of people who are destined for big things.

Housing, bilingualism, clean potable water from taps, an armed forces, a generally well-connected and efficient transportation system, world-renowned airline, airport, etc. There are so many things, if not everything, that he had dabbled in to bring forth. Even without having the experience of living overseas, business trips that had led me to various parts of the world outside of the usual holiday destinations make me appreciate the convenience and safety of Singapore.

I missed the opportunity to head down to the Parliament House on a couple of occasions and was feeling extremely disappointed and uneasy. On Saturday, I made up my mind to go early in the morning to pay my last respects to this great man but was dismayed when I awoke to know that the queue had been suspended from Friday night. I headed down instead to Tanjong Pagar Community Centre to write a tribute to him, joined a file of people and bowed to his portrait.

After a yoga class, while I was having coffee, I read that the queue had re-opened at 615am, just right after I went to the TPCC. My heart was undecided but finally I went ahead with my heart’s desire, finished my coffee and muffin in a jiffy, and hopped on down to City Hall. It was a balmy and humid afternoon, with rain clouds threatening above. As I joined the steady stream of people all headed in the same direction, I overtook many as I brisk-walked along the route that took me from the exit of City Hall MRT opposite the former Capitol Building, along the street across from Raffles City to the Padang to the Esplanade, past it, all the way to the floating platform where we looped back along the Esplanade. I came to a half somewhere after emerging from beneath the Esplanade bridge (or whatever that was called). By that time, sweat was trickling down my temple and sides of my neck. For someone who doesn’t perspire that easily these days, I could only imagine the speed at which I had been trudging along. The queue inched slowly forward, but all through the route from the Padang, lots of volunteers lined the way distributing sustenance of food and beverages. Some even went as far as cheering us on, while we struggled to catch some fresh air to prevent ourselves from fainting.

The queue was unbearable despite that there wasn’t much of the scorching sun for most parts of it that day, not like what some others went through. There was some drizzle when I reached the Asian Civilisations Museum, but compared to the downpour that drenched those on Sunday, the drizzle was really a walk in the park.

Finally, after what felt like forever but was just about 2 hours, I arrived outside the Parliament House. 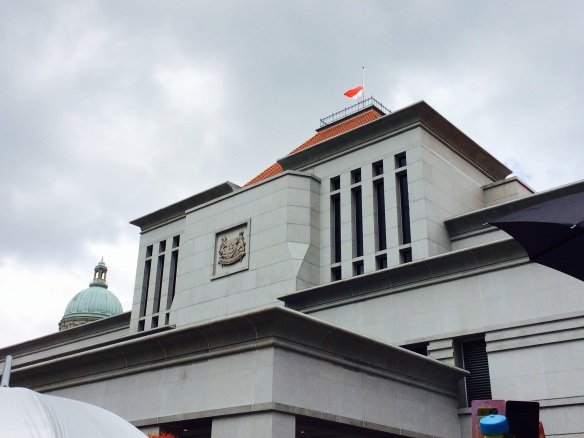 From that point, everything happened in lightning speed. In 2 files, we made a procession past where Lee Kuan Yew laid. I was in a daze, that as I passed I slowed a little but missed to stop and bow. I really regretted not doing that but at that point I only thought about moving on so that others could also come in to pay their last respects. As I exited the solemn hall, it hit me what I didn’t do. But I could no longer head back in.

It’s just like that with life, sometimes when we pass over something that we had considered doing but ended up not doing, there is no turning back. That is why there are always people telling us about the importance of seizing the moment and living in the here and now.

It was a sad week for many of us, and indeed I felt down but I didn’t go as far as shedding tears, even if I consider myself to be somewhat emotional these days. Perhaps it is a different kind of loss that I am mourning, thinking about what would lie ahead for us now that we have lost someone so vital to the development of Singapore, even if not all his policies and decisions were right. It was different as compared to earlier this year when my grandmother passed away; even if we weren’t as close as compared to the relationship I had with my maternal grandmother, it was heart-breaking when I saw her for the last time, lying in the coffin with her eyes closed for the last time, with pale pallid skin replete with wrinkles, a far cry from how I remembered her to be. Then, it was a 3-day wake that I attended and during the funeral as we trailed behind her cortege, I couldn’t help but break down as I thought about how we are now separated by life and death.

Anyway, Mr Lee’s passing caused me to reflect on a lot of things. I don’t know if these reflections will amount to any tangible actions but I hope it will make me more appreciative of things, be thankful of the things that I have, and learn how to live a better life.

Singapore will always be my home, whether or not I complain about its everything. I don’t believe in leaving and migrating because somewhere else is better off than here. We aren’t necessarily the best but because this is where we were born and grew up in, it’s where we belong and should work to make it better for ourselves.