This post concludes the series of posts of the Hong Kong trip, which spanned a week until Christmas day. I flew back in the afternoon, which usually wouldn’t be the case for HK because it doesn’t make sense if it were a 4D3N trip, but since this was a week and because I had originally thought that I would have shifted to a new place by December, I had planned to arrive in SIN in the early evening to allow myself time to… well, settle in and get home.

Anyway, short post with fewer pictures since there wasn’t as much eating done as compared to the past days.

Headed out early in the morning to get a box of biscuits from Kee Wah for mum, even though I know she isn’t that big on all those traditional biscuits. She finds them too sweet, and will usually complain that they are too much to finish (on her own). I guess that’s also where I inherited my calibrated sweet tooth from, because I admit that I have a sweet tooth, but it isn’t all sweet things that I like and can take. So I just bought a box of their 老婆饼, which she kept only 2 and gave the rest away to my aunt, which was really fine. I am trying to not sweat this; if it’s bought for her, she can decide who she wants to gift them to.

After buying the biscuits, I headed back to the hotel, and after our last minute packing, we went to a nearby local cafe for a last local breakfast. This was what my friend ordered, which seemed like the full works – macaroni soup with ham, luncheon meat, sausage, fried egg and spiced beef! Oh wow, this would have been perfect, though if I were ordering it would be instant CQYD noodles instead because I am not a macaroni fan.

I think I ordered yuan-yang. But I can’t remember. 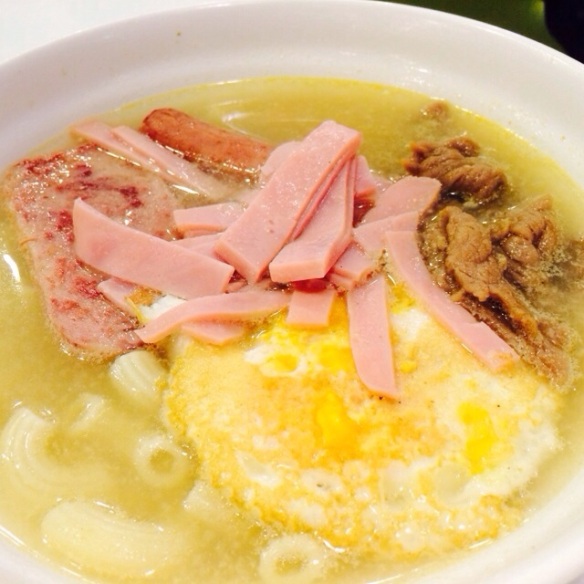 Close up of all that awesomeness in a bowl.

This was mine – which as an after-thought, reminds me of McDonald’s big breakfast.

It’s a breakfast platter of sausage, ham, fried egg, sausage patty, and a slice of toasted thick toast. I LOVE this thick toast, because even though it’s white bread, it was pretty well toasted so that the bread was nicely-crisp and crunchy to the bite!

Not so keen on the sausage, ham and patty though. They are not bad, but just not ideal because I do hope to cut down on processed stuff. If I can!

That kind of concludes the eating in Hong Kong, for a week. On our flight back, since it’s Christmas day, SQ actually served up a mini log cake as part of the meal, a nice gesture!