In April, I checked out Bikram Yoga in Tokyo while I was on vacation. Exercise doesn’t have to take a break while we are on holiday, as I have realised, is not just my personal mindset because one of my two friends whom I travelled with was also hitting the gym almost on a daily basis! I suppose besides that we try to incorporate exercise into my daily lives, much like how we need to eat and sleep each day, it also helps us to burn off excess calories from all that good food that we enjoy when we are on holiday.

Maybe the fact that I am trying to maintain a regular exercise regime also affected how I think about what my job requires. Last year, I had crazy travelling schedules, by my measure; it wasn’t entirely hectic, but having to be out of the country each month, for either a week or two each time, could seriously disrupt this routine, besides screwing up my body clock and causing some health problems. Jetting across timezones can take its toll on my physical as well as mental health and that’s just the tip of the iceberg. It might also be due to age, where somehow the body is not reacting well to the physical stresses of travelling, coupled with other forms of stress that this endeavour creates. Finally, I have probably also felt the desire to spend more time with my family now. Although I am still not what some would describe as being very close-knitted with my family, time does change people to a certain extent.

Anyway, on this last business trip to France, I decided to find out before I went if they had a Bikram studio too. Well, most big cities have some form of Bikram yoga, and I found two studios located in Paris, which I thought to check out during the weekend. I couldn’t go on weekdays because the office, as well as the hotel where I was putting up at, isn’t located within the city, and it easily takes about an hour to get to the heart of the city. On the first day that I arrived that was Sunday, I made a trip downtown but was too tired physically to want to drag myself to the class. From the website, I saw that they conducted lessons in English, once a day, at each of the two studios. As I could only make it for the 4pm class, I wasn’t able to last that long outside and still pull through, so I left Bikram for the coming weekend. 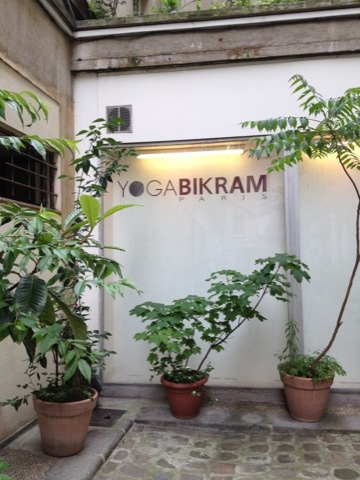 On Saturday, I was out shopping on my own downtown, and after not having much success there, I found my way to the studio at Grands Boulevards. It is about 10 minutes’ stroll from Galeries Lafayette (on Boulevard Hausmann), and very near to the Grands Boulevards metro station. I spent a lot of time walking that day, and since the weather was rather good, I just walked around the city the entire time. The studio is pretty small, and it only opens its doors 30 minutes before class starts, so I was standing outside this door for quite some time since I reached way before 4pm. 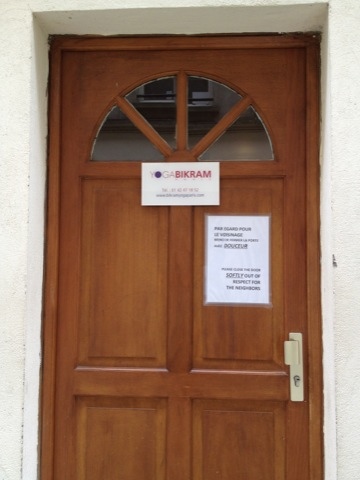 They have a small changing room with lockers that you can operate with a one-euro coin, refundable when you open it, and 4 shower cubicles. It isn’t a large place, smaller than Bikram Shinjuku in Tokyo but it wasn’t crowded. The first time I went, the studio was only about half-full, which numbers probably about 10-12 practitioners, I couldn’t remember. The studio could supposedly accommodate up to 25 persons but perhaps being a fine Saturday afternoon, most people are out enjoying the weather in town. It was much warmer on Sunday, and so the studio was also more unbearably hot and humid, especially when the fans were not switched on at all. Sunday was also a day when most shops are not open, so that probably explained the higher turnout for the same 4pm class.

Perhaps the studio being small, the instructors could really focus on the students, and they even knew them by name. Also since I was a guest (of sorts), and obviously being very different in how I look as compared to the others, they would also call me out on the postures if I wasn’t doing something correctly. It was rather stressful at some point, but it’s a great way to improve! I had fun during the two days of practice at Bikram Yoga Paris, and I’m not sure if I will ever return because France is just too far away (and expensive to travel to too), but the instructors were great and I think the price is pretty ok, cheaper than Tokyo! I got myself a promotional offer, which was a 10-day pass at 35 euros. Considering that even though I only went for 2 classes in 2 days, it was already worth it cos a single class is priced at 25 euros (without adding on the costs of towels and mat). 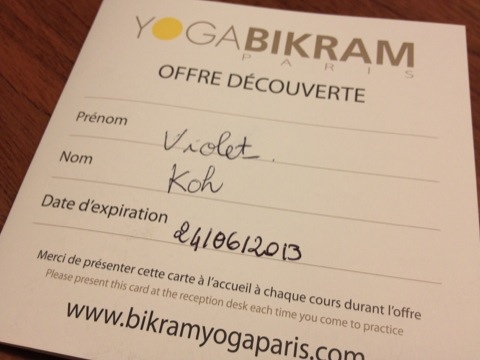 I wonder where will be the next city where I will get to practice Bikram Yoga at. It helps heaps that they had English classes in Paris, because although the 26 poses are always the same and the routine is the same, Bikram Yoga is still a dialogue-based class where we try to follow the instructions when to go into the pose and so on. When I was in Tokyo, the classes I went for were in Japanese (they also had limited English classes too) and I just went through the routine without knowing if the instructor would have been trying to correct me.