Last weekend, I finally stepped into a cinema again, after what felt like lightyears. These days, social life seem to have taken a hiatus but then again, it isn’t like I’m living the life of a recluse or hermit. But it is always nice to meet up with friends whom I haven’t met in a while, to catch up on each other’s lives and reconnect once more.

Caught the movie, Star Trek: Into Darkness, because ever since I caught the first one in 2009 starring Chris Pine and Zachary Quinto, I had thought that I would want to continue watching it when they come out with new episodes. I was never really into Star Trek, rather knowing and being exposed a little more to Star Wars instead since young. And I would admit as much, Chris Pine as Captain Kirk and Zachary Quinto as Mr. Spock are a major reason for me catching on this. Haha, well it always helps to have some eye-candy in a movie doesn’t it? I liked Into Darkness more, or should I say, I actually don’t really remember much about the 2009 instalment that I watched that is all of 4 years ago! But Into Darkness had more action throughout the duration of the movie, and is certainly more action-filled.

When the movie ended, we decided to pop in to Robert Timms for a drink, and since I was there how could I resist the coffee? Despite that I have resolved to consume less coffee on a daily basis and have been fairly successful, that day I think I effectively overshot my usual dosage. But they serve nice coffee, and the thick frothy milk that comes along with the latte is also much welcomed. Perhaps the next time I should send in a request for a more special latte art? Would they actually accommodate such a request?

Before the show started, I wanted to have a bite since it was dinner-time but as I had something during tea-time, the obsessed me decided to go for a supposedly healthier option of a salad. Ok, maybe this doesn’t come across as looking very healthy because the meat seemed to be glistening with a sheen of oil, but well it is a salad after all, and hopefully the greens compensate otherwise. 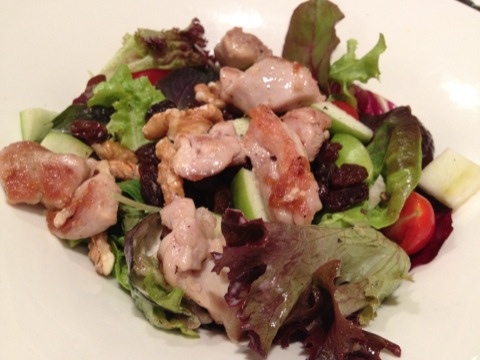 This was ordered from the Cinecafe at Shaw Lido, which I thought was a good place to grab some dinner before a show because the last I recalled, it wasn’t too crowded. That day, we managed to get a seat and had a choice of several tables to pick from, but maybe about 5-10 minutes afterward, the place became full and in the first place there aren’t that many tables to go around. Food here is pretty decent, and perhaps offers a wider variety than Canele that is just next to it, price-wise it is reasonable, not really that economical or cheap since this portion of salad I had costs S$10 but for convenience I suppose it is still considered ok. This was a salad of chicken, greens, walnuts, apples and raisins, which is some sort of a modified waldorf salad maybe. I really enjoyed it and the vegetables and chicken chunks helped to make it a satiating meal, except that at the end, some of the purple leafy vegetables were a tad too bitter to eat.